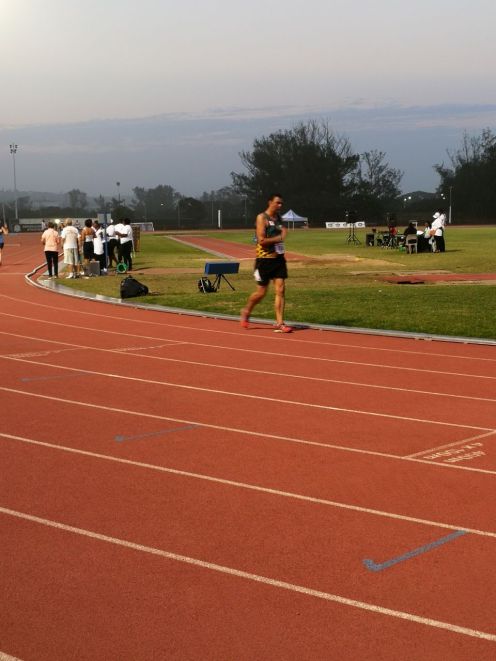 After some encouragement and motivation from fellow walkers, I decided this year to give myself a new but daunting challenge, to compete in Masters Track Race Walking. My fellow walkers had sold track as fun and social and a way to improve your speed and technique. My rubbery arm was bent.

After only two official track training sessions, the KZNA Seniors and Masters Championships were upon us, the 5km being held on the Friday evening. The butterflies soon turned into vultures descending on a carcass and I began asking myself what I had got myself into as I had just completed the notorious hilly Savages time trial through Burman Bush on Thursday! I was politely told by the Master’s secretary “There is no cure for stupidity” with a wry smile on her face. Before I could locate the exit to plan my escape we were under starters orders for the 5km race walking track event. The 5km event is 12 and a half times around the track under the watchful eyes of race judges, spotters/time keepers and spectators. The spotlights were on as the sun was setting as we pounded our way around the track, to the motivation of the stadium announcers encouraging the crowd to cheer for us.

Once the 5km was over, reality set in once again as we were told that we would be doing the 10km road race at 05h30 on Saturday morning which comprised of 1 km lap on the road that runs alongside Peoples Park. I dragged myself out of bed to heavy legs at 3h45am on Saturday morning. At the start line I met with a number of enthusiastic walkers who had the sanity not to do the 5km the previous evening. Why didn’t I get that memo?

The sun started to appear from behind Suncoast and we knew we were in for a hot 10km. The gun went off and we were off like the opening of doors on an Edgars red hanger sale as all walkers jostled for position around the 1km track which had to be conquered 10 times for the sane and 20 times for the ultra-insane under again the watchful eyes of the appointed race judges and officials. These officials were  placed around the track and all of us were hoping to avoid the dreaded yellow paddle warning against bent knees or lifting feet. Three warnings by different judges means you are disqualified, so concentration is paramount.

Feeling the effect of the Thursday time trial and Friday evening’s 5km, I received a warning for bent knee on the 7 km lap on my tired jelly legs . This gave me a wake-up call that this was no joke, I corrected my technique with heaving lungs for the next 3 km to waddle over without any further warnings to complete my 1st 10km KZN Master’s Track race.

Track race walking is definitely not for the faint hearted as fellow athletes told me it’s another  beast …true words! I was still crazy enough to do the Martitzburg half marathon on the Sunday morning.  I am sure there is a padded cell with my name on it somewhere! Next time I will be better prepared  to fly the Stella flag with pride.

Magdalena Tomlinson of Stella Athletic Club competed at the KZN Senior and Masters Track and Field Athletic Championships held at Kings Park Stadium on 23 and 24 February 2018. In the women age 75 category she won Gold in the 200metres Sprint event. In the 800 metres event she broke the SA Record by 25 seconds. This record had stood for over 15 years. The President of KZN Athletics, Mr Sello Mokoena, presented her with the Gold Medal.