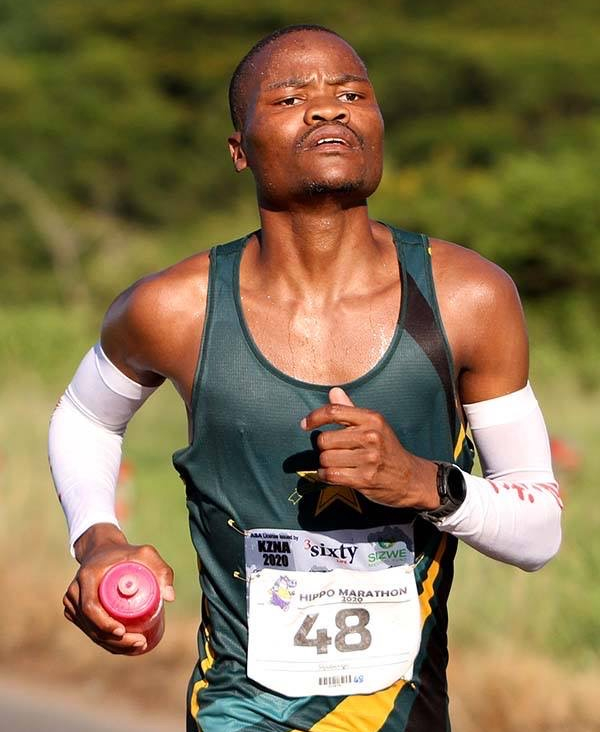 It had to happen! The barrier that had been on my mind since the beginning of 2020, I had no choice but to run a Sub 3 marathon. Runners might find it arrogant, but my mind was made up, I was going to go to Richards Bay on the 22nd of February 2020 and run a marathon in under 3 hours, so please allow me to share the best 2 hours and 55 minutes of my running life.

In August 2019 after the Mandela marathon, Gcina and I decided to go run Hippo Marathon in Richards Bay the following year because we had great reviews about the course, flat they said, they lied to us! There is no such thing as a flat marathon especially after 38km where a speed hump feels like a hill.

We left Durban on Friday at 12:04 and were at our destination in no time, collected and whined about not having plastic sachets on route, especially with 34° expected on race day. Oscar was kind enough to show us the route so we could strategize. I find it easier to run when I know what’s coming. At 6:20pm on Friday we did a 4km jog at 4:22/km to stretch our legs and get a feel of the roads and the air in Richards Bay, found the humidity not to be as bad as Durban, and that made me happy.  We got back to the hotel and prepared our drinks, but we had a challenge as no one was there to second us. Oscar was kind enough to find someone to do that job, but that was a disaster as we only met the guy 15 minutes before the start. He could not process the information fast enough to do an efficient job (we only met him at 27km for the first time), he popped up at 38km when I was expecting him at 32km, was already running on grit at that time but that caffeine GU gel was heavenly when I got it at 38km. Now this is how the whole race went.

The gun went and I said “Valar Morghulis”, Game of Thrones fans will know these words very well, but at that moment I was prepared for a battle, the battle of dipping under Sub 3. In racing terms, you only have to maintain 4:15/km for 42.195km to finish in 2:59:59, I had bigger plans than that. I had told myself that every part of the race must be like a training session, and had planned to replicate all my sessions in one race. As soon as the race starts you climb a monster 350m hill, my mind went into Hill repeat mode and I was done with it without any trouble, I knew that the next 13km was flat and undulating with gentle climbs popping up now and again, these gentle climbs became monsters in the second lap. The first half went well, I could stay at 3:55 without breaking a sweat and put the hammer down to 3:45 on gentle downhills. I had expected our guy to be waiting for us with the magic stuff at 12km, but “dololo” he was nowhere to be found, bought time and only took the GU gel I had with me after 15km, felt the magic as I crossed the halfway point at 1:22:50, climbed the 350m hill at 4:05/km and went on cruise mode trying to stay at 4:00/km.

My face lit up when I met our drinks man at 27km, took my second gel and decided to push a bit because I had expected to see him in the next 5km’s, but that was not the case. Went through the 30km mark in 1:59:35, that is when I knew that Sub 3hrs was in the bag, now it was a matter of how low can I dip under the magic figure, Sub 2:50 started to pop in my head but that all vanished when I got to 32km and did not get the most important gel in my race plan, I needed that high caffeine gel to turn me in to running lunatic. I did not know what to do, the temperature was rising with each stride, so I could overheat at any time and stop on the side of the road like an old Toyota (I drive one too). Decided to drop the pace to 4:30-4:35/km as I knew this would get me a 2:55 without much trouble.

Gcina came into this race carrying an injury, and when I started seeing him on the road, I knew he was in trouble, I ran with him for about 150m but he could not keep up, so seeing my running mate battle at a race messed up my head for a while but he told me to go, and that made me feel at ease with the decision of living him behind.

I got to 38km and I started to feel my legs getting heavier with each stride, it was getting hot, above 30° I reckon. I was in the dark hours, now the last 4km were a challenge but I started to think of the people who would be disappointed more than me if I did not get the Sub 3. I thought of my wife to be, my club Stella who have been supporting with kudos on Strava and just general encouragment, my head went back to a track session I did with a mad Surgeon Henry Van Niekerk, surely this last 4km is a breeze compared to that madness we did two weeks before Hippo. I do not remember the last 4km except asking people to move and leave the yellow line to me, I do not know what was that all about, but I just wanted to run in the yellow lane until I finished, and when I entered the finish point I said “Valar Dohaeris,” meaning “all men must serve.” I had served a 2:55:17 (2:54:43 official time) on a steaming hot day in Richards Bay, now let the “Chasing Silver” slogan take over in preparation for Comrades. I have dare to dream “Iphupho lam” and hope to achieve it.