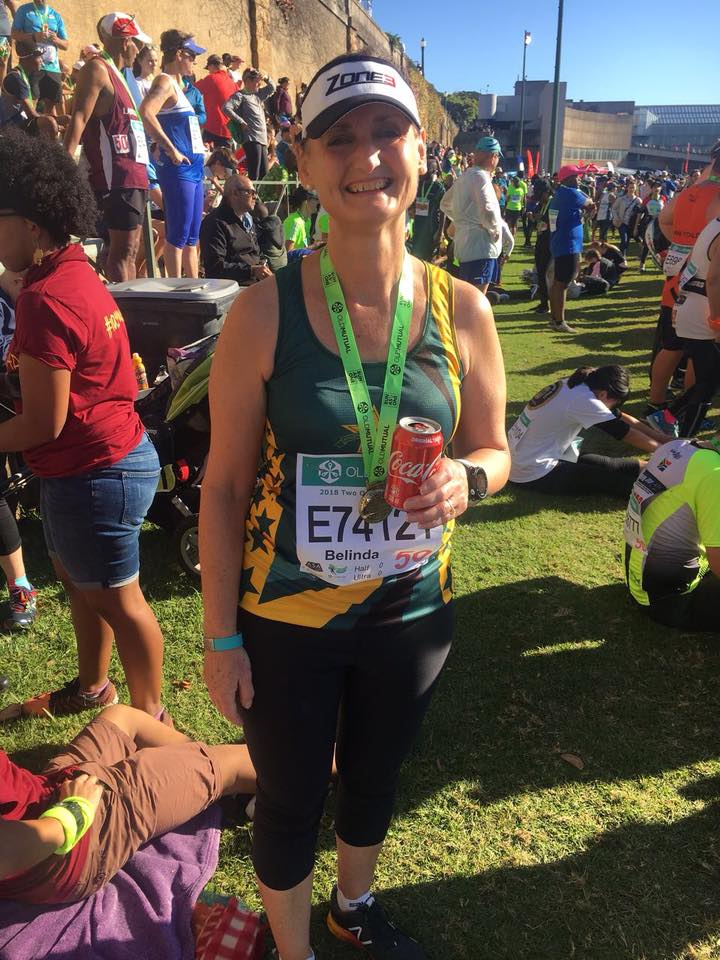 I had always thought that the TWO OCEANS was for serious athletes or other people. So had never really given it any thought until an old walking friend invited me to join her to do the Two Oceans Half Marathon in 2018. After a bit of consideration I thought WHY NOT!

We began planning towards the end of 2017 and started to train. I got input from experienced athletes on training and what races to do on route. Unfortunately along the way I picked up an ITB injury about 6 weeks before the race, not ideal. I was very frustrated. But I got through it.

Arriving in Cape Town was super, there was such a buzz.

The race day had officially arrived it was a cold, dark and daunting morning. Daunting as I was still unsure if I was going to be able to complete the race ahead of me.  We arrived at  4.15am and made our way towards the front of E Batch, which is the last batch to be sent off. It was fantastic watching thousands of athletes getting ready to run their races. I saw a chap who was doing the race on crutches. Later I googled to see if I could find out who he was and how he did. Well he finished with the help of fellow runners. His name is Ipeleng Khunou. That’s the spirit of the Two Oceans.

When the cannon boomed and it was our time to get cracking I actually got quite emotional and had to tell myself to get a grip. It’s an awesome experience running with soo many people, it truly was a privilege. Don’t underestimate the race it’s a toughie. Train hills. Along the route I’d asked someone “Does this hill ever end?” to discover it was the famous Signal Hill which went on and on. I was very glad to get through the 18km cut off. I think there were a few more hills before the end, my legs were finished but just soo chuffed to have finished the race. I’d love to do it again with more training.

I want to thank Dave and the Newbies for all your input I wouldn’t have been able to do it and Cindy for flying the STELLA flag was super seeing a familiar face.