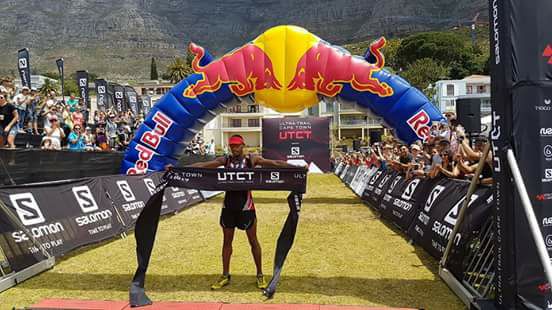 It was all systems go at 4am on the 2nd of December 2017. Lining up with the world celebrated trail blazers with the likes of Ryan Sandes, Scotty Hawker, Bongumusa Mthembu, a 2 times comrades marathon winner, and many more.

“You can’t stop the rain but you can learn to dance in the rain.” This is one of my favourite quotes when I have to face a challenge. The competition was tough and nobody could predicted the outcome. Having missed the press conference on the Thursday, I arrived on Friday to hear that trail runners were saying Comrades runners didn’t stand a chance to make a podium finish in a field of quality seasoned trail runners, and I would have agreed.

To the others it was the excitement of the outcome but for me it was a privilege to be in a race with these lads and to see what I could do. The Ultra-Trail Cape Town (UTCT) is where Comrades marathon runners and ultra-trail runners meet to compete in one event. My 2016 win was a rewarding experience, but I was better prepared for the 2017 race, and I knew what was coming.

Most of my training was done at the Inanda Valley, that is my playground. I run along the valley through dirty roads and trails and I like to run on the grass as well so my preparations were done there.

Back to the race… As the light started to come up I switched off my head lamp. It was while I was packing it away that Ryan, Bongumusa and Scotty came past me. I heard the sound of their feet pounding in the same time in rhythm with each other. It was just after Signal Hill that I knew they were working together. I said in my mother language “Nansi impi lyeza” meaning the war is coming. I don’t like to run somebody else’s race, I like to pace myself, so either I run by myself or stay behind. My plan was to make sure I climbed Table Mountain first, which I did. I had good speed, which I think is a result of my improved strength training that I do on the hill sessions with the group I coach at Stella Athletic Club.

As we headed on to the top of Table Mountain we were all together again so I let them pass and I stayed behind waiting for Sandy Beach where I would attempt to take the final lead. I knew that very few runners train on beach sand and luckily I’m one of them, so it was my strongest point. I opened up a 300m gap and felt strong. My opponent’s strength was on the technical parts which is my weakness so I played my cards right and it worked.

John Hamlet, my coach, I call him the Colonel, was there on the route most of the way with my Fiancé Lihle assisting me with information, drinks, food and making sure everything was going well.

John would say “please stay in the fighting zone” and it was at Hout Bay river where I was told I was 6 minutes ahead of Ryan Sandes. So I kept it at 6 minutes ahead until 80km where I stretched it to 11 minutes at some points.

At Constantia’s last fuelling table I was starting to feel dizzy and I had nothing left in the tank, but I was taught that I have to finish what I have started no matter how tough the circumstances are. Soon after the water table there was a long very steep climb and I was left with 10km to go, which felt like 50km. I was told that Ryan was closing the gap. At this point I thought of the hill sessions that I was doing at Inanda which are 1km x10. So I said to myself I only need to climb once. I walked/ran/walked/ran until I reached the top. If I gave up I was not going to forgive myself after all this hard work. I thought of all the hard work I went through in training so I couldn’t afford to give up so easily. It’s true that hard work can beat talent if talent is not working hard enough. I see myself as not talented in trail running.

Trail running is a different ball game to road but I enjoy trail more than road. I get time to appreciate nature, the mountains, rivers, sea and the forest. Whilst on the road I run to see how much I can push myself. There is no time for all that fun I have on the trails!

I started to hear the MC calling my name when I was 1km from the finish at Garden Tech Rugby Club field. I looked at my watch a couple of times as I entered the grounds to the finish; I was a proud winner and a record breaker. The feeling was out of this world! I appreciated it more because I didn’t plan to win but it happened . “Chance favours a prepared mind.” 9 hrs 51 mins was the winning time. I took off 50 minutes from the previous record. Ryan wanted it more, he wanted to win the race for Cape Town. He was the local, familiar with the route and we ran hard from the gun. We both ran under 10 hours, he was just unlucky on the day. I waited for Ryan Sandes to come through and I congratulated him. Then we both waited for the 3rd runner Scotty Hawker from New Zealand, and that was the wrap up for the day.

I was disappointed by journalists asking how I felt after beating Ryan Sandes and I answered that I have never run to beat anybody but rather to beat my own times. I gained the name “chameleon” after winning my first UTCT because my friends and fans in Cape Town were shocked to see me performing in all areas. If you put me in cross-country, road, track or trail I will surprise you. My secret is that I prepare for every race differently. I train according to the terrain that I will race.

UTCT 100 Km 2017 is one of my career highlights. As I went to bed closing my eyes I remembered these words from my first coach “Success is not an accident but is a result of preparation, discipline, hard work, correct training, loving what you do, dedication, focus, and patience.”