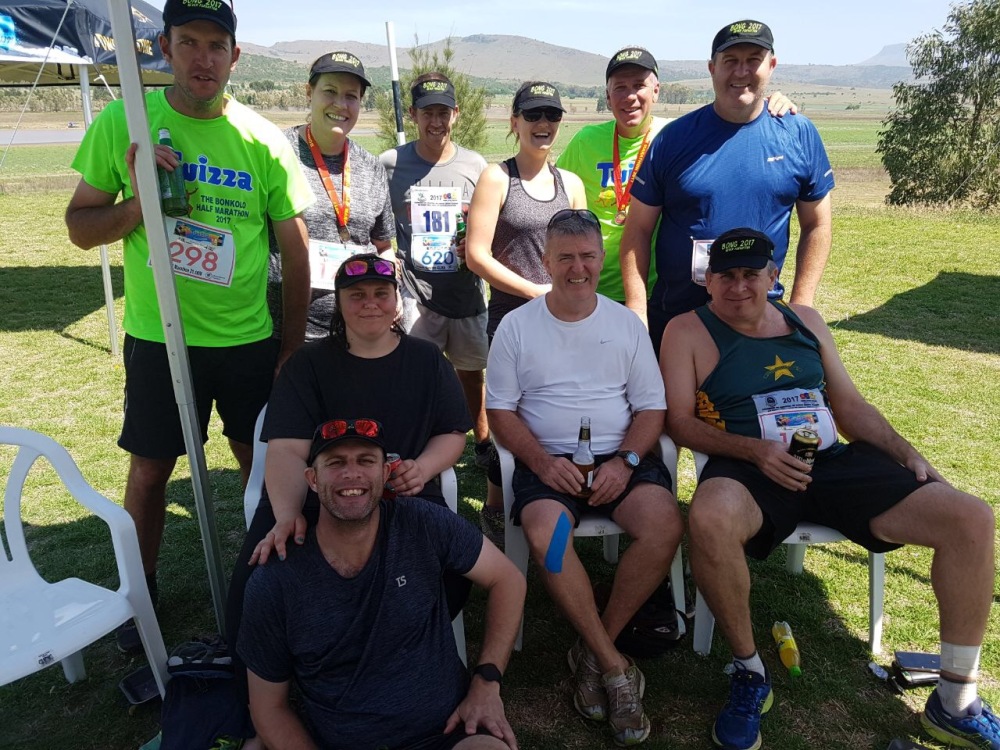 4am, Thursday 2 November. We decided to make an early start to tackle the 650 km journey to Queenstown. My co-pilot John Nicol was in the front passenger seat and my Mom and her Schnauzer, Bella, in the back. In front of us was Kokstad, Matatiele, Mount Fletcher, Maclear, Ugie, Elliot, Cala, Lady Frere and finally Queenstown, the home of the Twizza Bonkolo Marathon. The foothills of the Southern Drakensburg and then aloe country must be some of the most beautiful scenery in our country. A pleasant drive was however punctuated by those dreaded stop / go’s where the road is being resurfaced. With my luck I knew that I would arrive at every one of them at exactly the wrong time and spend ages baking in the oppressive heat. I was not disappointed.

Nine hours later we arrived in Queenstown. Boy was it hot. The ‘Stella on Tour’ boys immediately started the necessary ‘rehydration’ process. We did not want to be ill-prepared on race day. It was evident that the Eastern Cape was also in the middle of a drought. The Bonkolo Dam which serves as the start and finish of both the marathon and half-marathon was only 30% full.

A lot of people may wonder why I would want to go all that way to do a road race. They need not stress as runners do not need a reason to do strange things. On a more serious note I have a family link to Queenstown. My Mom was born there and I have two cousins who live in the town. The race also serves as an annual family reunion as another cousin and family come up from Port Elizabeth for the run. Over the years the number of family and friends participating in the race or seconding has grown substantially. This year we had 24 people involved in the race and there are plans to expand this next year. It’s amazing how too many ‘refreshments’ can lead to commitments by non-runners to run the following year.

The Friday was hot, very hot. The town becomes a hive of activity with runners coming from far and wide to participate in the event. Us Durban runners take races and race organisation for granted. We know that every weekend there will be a race within a 45 minute drive of us.  In the Eastern Cape / Border region people travel 3-4 hours to participate in races. That often means either paying for accommodation or leaving at 1am in the morning to arrive before the start time. I saw people from running clubs in Aliwal North, Craddock, Port Elizabeth, East London and all over the Free State. As is tradition people meet at the Sailing Club at the Bonkolo Dam on the Friday evening to collect their numbers, enjoy a beverage and generally socialise. It is truly a joy to see that road running is alive and well in all corners of our great country.

Race day Saturday dawned warm with the possibility of the mercury rising to 32 degrees. Again us lucky KZN runners forget how fortunate we are to have race fields of 1 500 plus. In the country districts regions a field of 700 is exceptional. They are a happy bunch though with the chatting and laughing so loud that I actually missed the signalling of the start. Never mind, I knew that my pre-run carbo-loading had gone well and that I would storm through the field. Well, it never quite panned out like that. A shoe malfunction and still unknown medical issue impacted on John’s race so we parted at the 8km mark. I ended up running the rest of the race with a newbie from Port Elizabeth who was doing her first 21km race. The roadside festivities and hydration tables were exceptional. Local companies sponsor and manage these tables and they give it their all. I eventually dragged my weary body over the finish line after 2.33 minutes, with John following 13 minutes later. Not to let the family down we ate far too many pancakes and built our usual pile of empty beer cans. This year we chose to miss the prize giving. The MC / race announcer could learn a valuable lesson from Durban’s Mike Bennett. We could just not sit through his repertoire of embarrassing jokes and quips. The alternative was an hour in the hot tub with a cool ‘refreshment’, a short nap before the traditional family fines meeting and then far too much food and drink. Unfortunately all good things have to come to an end.

A tortuous nine hour drive back coping with searing heat and then mist and rain will not take the shine off a fantastic long weekend doing exactly what we love. Plans are already afoot for the 2018 ‘Bong’, with additions to the touring party being sounded out about their availability. I can only imagine the impact that a bigger Stella contingent will have on those poor country bumpkins. As a parting shot though – we must be grateful that we run for such an awesome club, in such an active running province. Do not take things for granted though and try and give something back to running. Too many runners only think about what running can do for them.