We woke to an unfamiliar stillness and a noticeable chill early on the morning of Saturday 9th April. We teammates, who had spent the night in Winterton, were in high spirits as we slathered on copious amounts of Vaseline, plastered ourselves liberally and wolfed down our energy-rich breakfasts, all in preparation for the 4 -7 hours of running that lay ahead. We were chauffeured some 20km in the eerie darkness to an intersection in sleepy Bergville where we met up with the rest of our Stella teammates and a 500 strong field of participants.

The gun fired just before the sun broke the horizon. It was in this comforting dawn light that we ran the first 12 or so kilometres; the Drakensberg unfolded behind us, green farmlands abounded and plenty of local supporters cheered us on and ‘high-fived’ us as we passed by. After 12kms, things got interesting! The gradient began to increase and we were welcomed by the steep Child’s Hill between 16 and 20km. It was here that I employed my carefully crafted run-walk strategy (i.e. walking peppered with 1% of running).

After cresting Child’s hill the nature of the course shifted. The scenery opened up as the sun-baked tarmac unfolded in a series of long straight stretches of both uphills and downhills. Roadsides become less populated as temperatures rose. This 20km stretch became a time of intense soul searching and introspection lightened only by occasional banter with passing runners or by perfectly positioned water tables (thankfully positioned before the start of most climbs).

At 36km some hope was restored as we reconnected with civilisation at a Highway Passover – here we got to see our seconders and supporters for the first time since the start. This high was short-lived as we were ushered off the tar and onto a quiet country sand road for about 5km.

By this stage the sun had become intense and the legs weary – even the Cosmos Flowers seemed intent on witnessing our demise as they abundantly lined the roadside in a gauntlet of beauty. The end was in mind as we moved back onto tar at roughly 41km. The deceiving route map did little to prepare us for the sequence of resolve-testing hills that awaited us in the last 10km. At that stage it truly became a case of mind-over-matter; the counting of telephone posts and blue plastic beacons became our mental artillery.

Joy overcame me as we descended into Ladysmith towards the finish. The view over the town and the promise of an ice-cold something gave me the strength to ignore my cramping and convulsing calves.

Moments after crossing the finished line, pride and pain were at odds, but as always pride won the day. The 51ST Arthur Creswell Bergville to Ladysmith 52km Ultra-marathon was an experience I will always remember. Despite the beauty of the surroundings, the day was unavoidably tough, and for that very reason, worthwhile.

It is in light of this too, that I have a new found respect for all of our participating Stella legends, and especially for Phillip, Shane & Ian who have now completed 36, 30 and 22 respectively. Go Stars!!!! 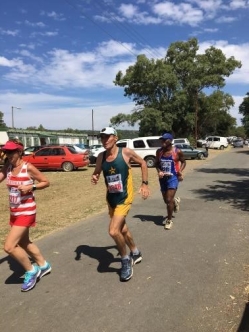 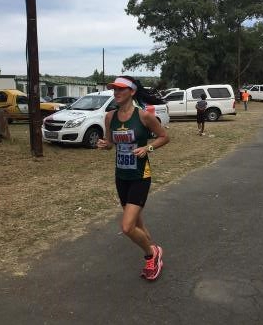